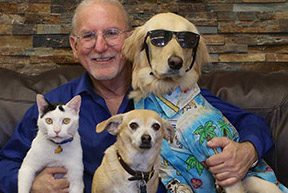 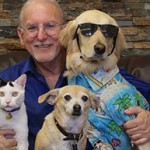 Joey Herrick is the President and founder of The Lucy Pet Foundation an animal charity based in Thousand Oaks, CA.

The Mission of The Lucy Pet Foundation is to reduce pet overpopulation by funding mobile spay/neuter clinics across the country and to support causes that benefit animal welfare. “Lucy” is the name of a female Chihuahua mix that was rescued by the Herrick family. She was found wandering in the mountains; completely covered with dirt, toenails curling under, tire marks on her back and malnourished. A few weeks after she was rescued, she gave birth to five puppies. Lucy and her pups became the inspiration for The Lucy Pet Foundation. Today Lucy is ten years old and comes to the office regularly to check on her Foundation.

Joey has a long record of supporting animals in need, with over 30 years of hands-on help. While Joey owned Natural Balance Pet Foods, he donated millions of pounds of food to animal rescue groups because it was his belief that they were the ones who were saving animal lives. He saw first hand how local rescue groups were going into the shelters, taking animals off death row and placing them into foster homes. After he sold Natural Balance in July 2013, he committed himself to do everything he could to help stop the 80,000 dogs and cats a week from being euthanized due to pet overpopulation.  Since he started the Lucy Pet Foundation in 2013, Herrick has spent over $1.9M of his own money operating mobile spay and neuter trucks in Southern California to provide low or no-cost spay and neuter services. As of April 2016, the Lucy Pet Foundation has spayed, neutered or vaccinated over 11,000 animals.

In the U.S. alone, over four million dogs and cats are put down each year in shelters. That’s over 60,000 a week. A pregnant dog like Lucy and her pups would likely have been candidates for euthanasia if left on their own. Most shelters are not equipped with space or financially able to house and care for a mother and her pups. Left to fend for themselves on the street, they would surely suffer and most would likely not survive.

The goal of the Lucy Pet Foundation is to have spay/neuter and adoption mobile clinics in every major city in the country. If you do the analysis in just one major city, the numbers are staggering. With one mobile clinic, we can spay and neuter over 120 dogs and cats per week. Doing this 48 weeks of the year means 6,000 animals will be spayed and neutered. This will prevent those animals from adding a minimum of 15,000 new potentially homeless animals to pet overpopulation. By year three it is estimated that we can prevent over 500,000 animals from suffering in that same community with just one mobile clinic.

With our goal to have at least 40 spay/neuter and adoption mobile clinics, we can really make a significant dent in pet overpopulation. When the mobile clinics are not performing surgeries, we will work with local animal shelters to save dogs and cats whose time is up. We will feature the animals in our mobile adoption portion of the truck at pet retail stores and events. Our goal is to find forever homes for as many homeless pets as possible.

The Story of Lucy 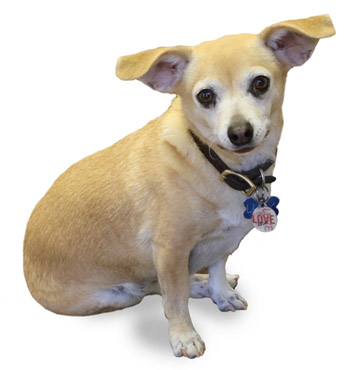 He called for my wife Lynnda who said: “that’s not a coyote, that’s a dog”! They decided to try and catch it. Soon they realized it was a female Chihuahua mix that looked like she had been out on her own for a long time. She was completely covered with dirt, toenails curling under and tire marks on her back.

Shortly thereafter, I came home and we took the dog to the vet. The vet said even with the tire marks, she seemed to be fine, no broken bones, just a little malnourished. The vet mentioned that she should be spayed. I said, “Absolutely, we need to”, so we made an appointment for two weeks later. This would give us time to look for her parents and also let her recover from being on her own. We got home and my daughter Bailey gave her a bath and then we looked on the Internet to see if anyone was searching for her. We also put signs up and asked around the neighborhood, but we had no calls, so we named her “Lucy” and made her a part of our family.