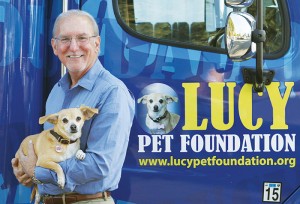 He called for my wife Lynnda who said “that’s not a coyote, that’s a dog”! They decided to try and catch it. Soon they realized it was a female Chihuahua mix that looked like she had been out on her own for a long time. She was completely covered with dirt, toe nails curling under and tire marks on her back.

Shortly thereafter, I came home and we took the dog to the vet. The vet said even with the tire marks, she seemed to be fine, no broken bones, just a little malnourished. The vet mentioned that she should be spayed. I said, “Absolutely, we need to”, so we made an appointment for two weeks later. This would give us time to look for her parents and also to let her recover from being on her own. We got home and my daughter Bailey gave her a bath and then we looked on the Internet to see if anyone was searching for her. We also put signs up and asked around the neighborhood, but we had no calls, so we named her “Lucy” and made her a part of our family.